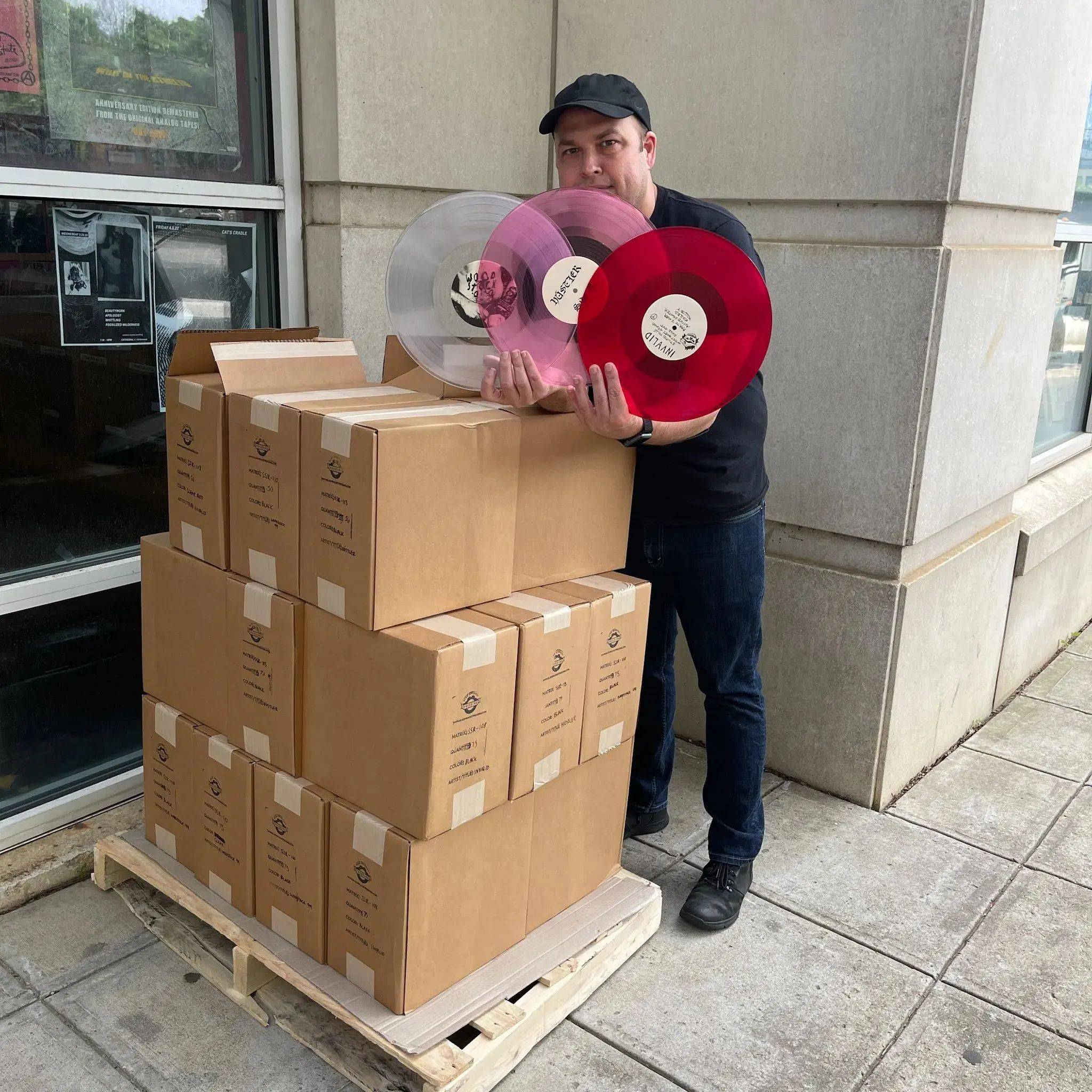 Today we launched preorders for three new releases on Sorry State, and coincidentally test pressings for three upcoming releases just arrived yesterday. I’ll have plenty to tell you about those records in the coming months, but listening to the test presses last night had me reflecting on the process of releasing a record. Earlier this week I put a lot of energy into writing descriptions for the new releases, which is a weird exercise. I love writing for the newsletter, but I always struggle to write the generic blurbs that get passed along to distributors and reposted on the websites of stores and distros that carry the record. I feel like I know my audience for the newsletter. I imagine the people who read the newsletter are the die-hards like me who are eager to know about all the coolest new releases, and my job of telling you about what we carry is pretty straightforward. However, when I’m writing for the wider, more nebulous audience for the descriptions, it’s very different. The cliche is that writing about music is like dancing about architecture, and I feel that when I try to both introduce and sum up a record I care about in one pithy paragraph.

For many of the releases on the Sorry State label, the official description blurb is one of the few things I write about the record. Which is ironic because these are the releases I feel the most connected to. While I lean on the bands for most of the creative work on the records I release, I develop a close relationship with releases as I shepherd them through the production and manufacturing process. This relationship feels even more intimate when I put out multiple releases by an artist. So, for my staff pick this week, I thought I’d give you an insider’s view of the three new releases.

The Sorry State label has never benefited from consistent branding. I’ve always released whatever excited me at the moment, and you can see trends in the label’s discography as I get into particular sounds or scenes. There are also certain styles I just like; Sorry State will always put out records that sound like early 80s hardcore. While the three new releases differ greatly from one another, each of them continues a thread that runs through the label’s discography.

Invalid’s self-titled LP is SSR-108, and given that it has the earliest catalog number, I’m pretty sure it was the first of the three projects to come together. (I typically only assign a catalog number once I have a master recording for a release; if you want to read more insane ramblings about catalog numbers, check out this old staff pick.) As I wrote in the main release blurb, Invalid appeared on my radar when they released their Do Not Resuscitate cassette on Cruel Noise Records. I didn’t know it at the time (though I might have assumed), but Invalid features members of heaps of other bands I like. If you cruise their Discogs profile, you can see connections to Blood Pressure, Caustic Christ, and EEL, for instance, but there are many more I’m sure.

It’s more than the pedigree that attracted me to Invalid, though. Stylistically, Invalid has this sound that I don’t hear often, but I love when I do. The three records I mentioned in the official description—Direct Control’s first 7”, COC’s Eye for an Eye, and Unseen Force’s In Search of the Truth—all fall under that umbrella. It’s 80s hardcore at its core, but with a bit of thrash metal in the riffing style and an emphasis on writing memorable parts that aren’t quite pop but are hooky as hell. So you get the intensity of 80s hardcore, the musicality of thrash metal, and the catchiness of more anthemic strains of punk brought together in one package. It’s a subtle balance to achieve, but Invalid nails it.

Beyond the style, I also love that Invalid performs their music with such intensity. Conventional wisdom states that hardcore is a young person’s game, but I tend to be fond of bands whose members are older. These bands know—if only intuitively—why they’ve stuck with hardcore. I love the sound of young kids discovering hardcore as an outlet for their youthful energy, but there’s something about old heads who use hardcore as a way of articulating and responding to life’s never-ending drudgery. It makes the music mean more to me, like hardcore is growing along with me as I get older and my values and passions evolve.

Next up is SSR-110, Woodstock 99’s Super Gremlin LP. While Woodstock 99 released a demo and a 7” before Super Gremlin, I’ve known the members for much longer than the band has existed. Their singer and drummer are both from North Carolina and I’ve known them and followed their projects since they were quite young. In that way, Woodstock 99 connects to another thread in Sorry State’s discography, and that’s documenting the hardcore punk from our part of the world. This part of the label’s mission, which is inspired by Dischord Records, waxes and wanes as our local scene does, but I’m always proud to put out music from North Carolina that I think deserves a wider audience. Not that Woodstock 99 is from North Carolina, but my connection to the band is personal, unlike with Invalid and Hüstler where I have had little real-life hang time with the band members.

Anyway, Woodstock 99’s three core members were in Cement Shoes, and I followed and enjoyed that band and the first two Woodstock 99 releases. I liked all of them, but I hadn’t considered putting out a Woodstock 99 record. Then my friend Trevor, who sings for the band, sent me the recordings that became Super Gremlin. I’m not sure if he was fishing for a label or just sharing what he made because we’re friends, but the record blew me away. It starts off in the (relatively) straightforward hardcore mold of their previous 7”, but bigger, bolder, and meaner, the crisp and bright recording and the band’s massive sound reminding me of War All the Time / Kings of Punk-era Poison Idea. But then the record goes somewhere else.

If you lived in the mid-Atlantic and saw Cement Shoes numerous times over the course of their existence, you probably noticed a change in the band. They’d always had an off the wall sensibility (just look at the cover art for their first album), but toward the end of the band, that evolved into full-on antagonistic crowd baiting. I remember a show where they opened for Warthog and L.O.T.I.O.N. in Richmond. Trevor harassed and abused the audience for the length of their set, to where I was kind of upset and worried about him. Now that I think of it, that was the record release show for their album, Too, and I remember one member telling me they sold zero copies of their record at the gig. It’s like they were daring the crowd to like them, and no one took them up on it.

I think the darkness of that era of Cement Shoes resulted from some particular circumstances, because once the members moved to Cleveland and reconfigured as Woodstock 99, the seedy darkness had reemerged as a more playful, yet still dangerous, psychedelia. One thing I like about psychedelics is their ability to unlock my sense of wonder, and even though I was sober and taking a walk on the nature trail by my house when I first listened to Super Gremlin, it summoned that sense of wonder. As I listened to each track, I couldn’t wait to hear what the band was going to do next. Super Gremlin isn’t like a genre record where you know what you’re going to get and the band impresses you with their adeptness at elaborating and interpreting a style. It’s a record that sees punk rock as a wide-open arena of possibility, and charges in whatever direction the wind blows. It’s a record that feels so fresh that I wanted to be part of it, even if I know some people will not get it at all.

Finally, SSR-113 is Hüstler’s self-titled LP, which compiles their two previous cassette releases on Sorry State. Hüstler is one of the few bands who I agreed to put out based on an unsolicited submission. People send me music all the time. Every day I get one or two emails, sometimes more, from people asking Sorry State to release their music. A large percentage of these I never listen to because I can tell that the person doesn’t know or care about what Sorry State does. Plenty of others I listen to and like just fine, but don’t feel the spark I need to in order to want to release a record. Putting out a record is a big decision that involves investing thousands of dollars and many hours of my and my employees’ time, and it’s not worth doing if I’m not passionate about the music. With these kinds of submissions, I suggest other places where they might send their music and offer to carry the record in our distro once it’s out.

Submissions rarely move me enough to want to release a record when I have no personal connection to the band, but when Tyler from Hüstler sent me what became their first tape, I was hooked. I couldn’t (and, truthfully, still can’t) articulate what I heard that drew me in so much, but Hüstler just had something. Their music had the intensity of the hardcore and punk I’ve always loved, but it sounded fresh. It didn’t sound like anything I’d ever heard, but I knew that I liked it. That Tyler just wanted to put out a cassette and wasn’t pushing for a vinyl release (which is much more expensive and riskier) made it an easy decision to press up 100 cassettes and see if the rest of the world responded like I did.

And they did! Hüstler’s first tape sold out quickly, and once the physical copies were gone, the digital version kept getting downloads on Bandcamp and plays on Spotify. A few months later, Hüstler did a second recording that was even better than the first one. Without losing the intensity, they leaned into the more idiosyncratic elements of their sound and arrived at something even more original and memorable. The second tape sold out even quicker than the first, and also continued to get plays on Spotify and Bandcamp. I haven’t checked, but I’m guessing Hüstler has done more business in digital sales than any previous Sorry State artist. I think we hatched a plan for an LP compiling both tapes around the time the second EP came out. Given the strong reaction the first tape got and the fact that the second tape was (in my opinion) even better made me confident that plenty of other people like Hüstler just as much as I do.

Re-reading this lengthy staff pick, I realize I pretty much said what I said in the official release blurbs I mentioned at the beginning, only with a lot more words. Maybe this version clicked with you when the snappier versions didn’t, or maybe you should ignore my ramblings and just listen to the music and form your own impressions, because you can do that in the year 2022.