All Things to All People Vol. 10


Last week I was on another record buy when I had a little epiphany. I'd made a house call to look at the record collection of an older woman in her 70s. She had about 100 records, but most of them were the records that you would expect someone that age to have, so I wasn't really interested. However, I did find about 15 records that were worth buying... OK copies of most of the Beatles albums (including a white vinyl copy of the white album), as well as a couple of blues records and an old Nina Simone LP. Nothing mind-blowing, but solid enough stuff.

Once I'd told her that I couldn't buy all of her records, she asked me something like "what kinds of stuff would you have been interested in?" I'm not sure if it's the specific way that she asked the question, the particular mix of records that she had, or what, but it caused me to think about this question of records' value in a way that I hadn't really thought of before. My standard answer to that question is the old "supply and demand" routine. I explain that Beatles records have a very high supply (tens of millions of copies have been pressed), but also have a consistently high demand, which means that they always have some degree of value. There's lots of stuff--particularly music from before the rock era--where there is a huge supply and almost no demand, and of course the stuff we all want is the stuff with a small supply, but a lot of demand.

Since this woman had primarily older records, it occurred to me to re-frame this argument slightly to talk about artists who were ahead of their time vs of their time (as well, I suppose, as artists who are behind the times). Artists who are "of their time," at best fall into the "high supply, high demand" category. Artists like the Beatles, Michael Jackson, Led Zeppelin, not to mention the first wave of big punk bands like the Sex Pistols, grabbed the momentary zeitgeist, and while demand may see occasional peaks and valleys, it's probably going to remain relatively consistent as long as people are interested in that era. However, the really valuable records are by artists who were very much ahead of their time... who may have been ignored in their day because their music was too weird, too raw, or had some other momentarily undesirable quality, but latterly aspects of their style became really important to wider strands of music. One key example of this is old blues records. While the interest in that stuff at the time it was being made was minimal (for a whole slew of reasons, not the least of them being the racial politics of the time), that stuff became hugely influential to 60s and 70s British and American rock, and consequently shot up in value. Similarly, post-bop jazz artists who made dissonant, difficult music were under-appreciated in their time, but the dissonant harmonies and jagged rhythms of, say, Miles Davis's later records (and even those of the next generation of musicians influenced by him, like Captain Beefheart for instance) eventually became commonplace in popular music. Those sounds were, simply put, ahead of their time, and the supply/demand balance shifted as a result.

None of this is earth-shattering analysis, I realize, but it constituted something of a revelation for me. In particular, it made me think about the critical reputation of some of the music I've been involved with, particularly the resurgence of early 80s-style USHC that's clogging up a lot of used record bins in the world. Even within that sphere there are bands who were ahead of their time (Government Warning, Wasted Time, Career Suicide), many bands that were very much of the time, and more than a handful who were somewhat behind the times. I'll avoid naming names in the latter categories so as not to upset anyone, but it's an interesting rubric by which to assess things.

Maybe in the future I'll try to think of artists who seem to exist out of time... who are so brazenly disassociated from meaningful context that the rules above don't really apply to them. There are a lot of them out there but I'll leave it for another day. I think the Fall might be a big one, though.

THOUGHTS FROM THE BINS 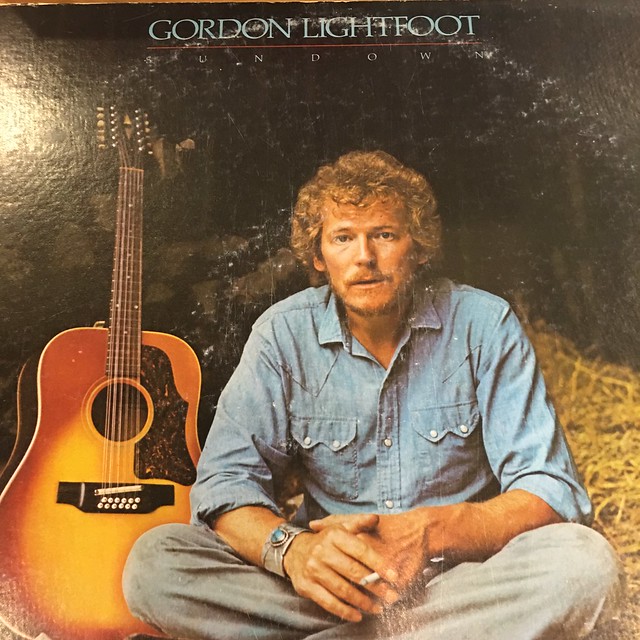 Every time I see the cover of this record (Gordon Lightfoot's Sundown) I think that Bryan Cranston and Chris Pratt had a baby. 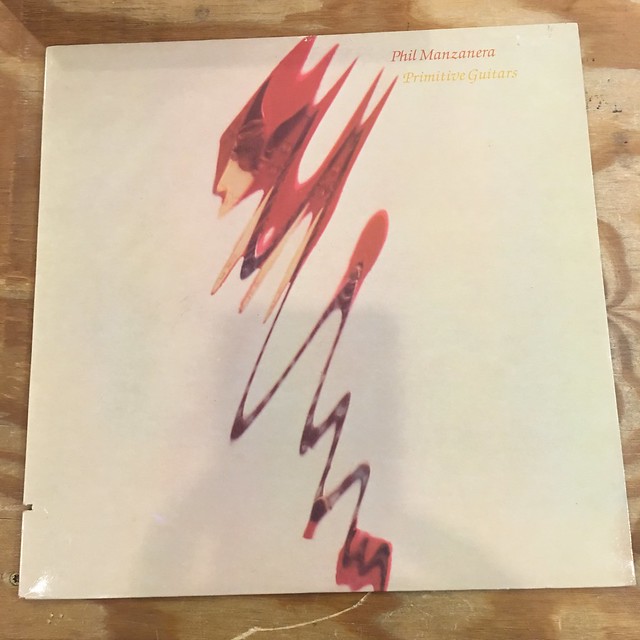 After writing my screed on that Brian Eno book last week I decided to listen to the one Phil Manzanera LP that we had in stock at the store, 1982's Primitive Guitars. Eno doesn't appear on this one (at least he's not credited on the back), but man is this Eno-esque... whatever "treatments" are on the various instruments seem to have been ripped straight from the Eno playbook, as has that very "white funk" bass playing style. Between this and listening to the Scott Walker-penned tracks on the Walker Brothers' Nite Flights I'm starting to realize that I seem to be transitioning into an "art rock" phase. 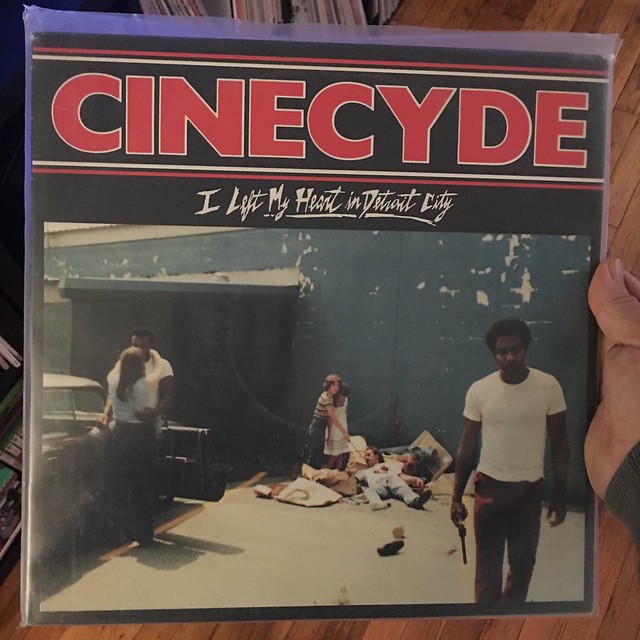 It's back to punk for my next selection, though. I've had this LP from Cynecide on my Discogs want list for a few years now and this is the first copy that's popped up in the United States so I made sure to grab it right away. Actually, I couldn't even remember very well what this actually sounded like. My buddy Dennis (who played bass in Cross Laws) had this record way back when and I remember hearing it once or twice. While I remember liking it, that feeling is only recollected through a haze of various substances consumed during late-night listening sessions and the many years that have elapsed since then. Well, it arrived the other day and I have to say that this is awesome. Totally hard-charging, heavy punk... it has that distinct heaviness and toughness that has defined Detroit music from time immemorial, but with a pop sensibility that a lot of tough-sounding bands lack. It's sort of like a tougher, more Detroit-informed version of a lot of my favorite '77 UK punk. I'm looking forward to getting to know this one a little bit better over the coming weeks.

While formatting this post I decided to check if this is on Spotify, and lo and behold it is, along with a heap of other Cinecyde releases. Looks like I have some work to do! 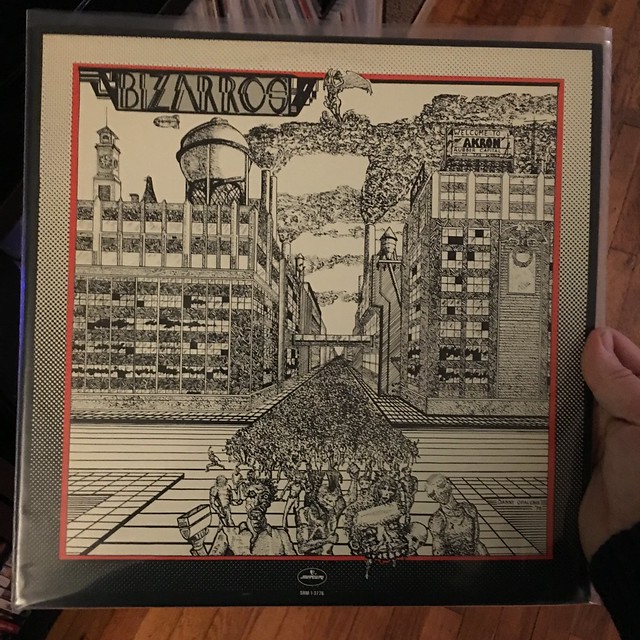 My other big musical discovery of the past couple of weeks is this LP by the Bizarros. This one actually came in as a used copy at the store (as part of an impossibly clean punk/new wave collection that we acquired a couple of weeks ago). I was in the process of transferring a new stack of freshly-priced LPs to the bins and my friend Scott asked to flip through them before they hit the floor. I obliged and he picked up this Bizarros LP, noting that it was the cleanest copy that he'd ever seen. I told him I hadn't heard it before and he made me stop what I was doing it and put it on immediately... and of course I was floored and immediately took it out of inventory and earmarked it for my collection. Hailing from the mystical land of Akron, Ohio, this LP came out on Mercury in 1979, but has a distinctly pre-punk vibe. It's very Stooges-informed, and has something of the same DNA as Rocket from the Tombs, Dead Boys, and Pere Ubu, but it's a bit more musically sophisticated than Dead Boys and not nearly as artsy as Pere Ubu. It's loud, fast, and tough all the way through without a single bad song on it... it's crazy that I'm 36 years old, have been into punk for over two decades, but there are still records out there that are this good that I haven't heard before.

Want to hear something really annoying that's happened to me with a couple of very, very cool projects over the past couple of years? A really cool band emails me saying, "Hey, we have new material. Would you like to put it out?" I reply saying "yes, absolutely." The band responds saying that they need it out by a certain date. I tell them that date is completely unrealistic and no comparable label will be able to meet that deadline. They say thanks, but they're going to go with a label that says that they can get it out on time. The record comes out a year or more later, easily twice as long as I would have taken to get it out. It sucks losing out on cool opportunities because I'm honest and realistic and won't promise the moon when I know I can't deliver.