All Things to All People Vol. 8 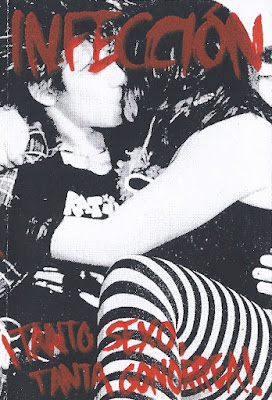 I mentioned in my last blog post that Terminal Escape wrote about Blackball, and then whattayaknow, a week or so later they actually write about one of my old bands, Infección. Reading other people's reviews / assessments of your work is always weird, but Robert's description of Infección probably jibes least with my perspective as a member of the band than anything I've ever read about one of my musical projects. Usually when I read reviews of my bands it's clear that the writer has listened to it at most once or twice and consequently it's easy to dismiss whatever they say, but I don't know if that's the case here. Of course I'm honored that my guitar would be described as D. Boon-ish... actually one of my big goals with Infección was to play with minimal distortion and have a brighter, trebly-er guitar sound that made much more substantial use of the lighter strings. However, I have to take issue with the fact that he describes us as so weird. Maybe the recording came out weird (I did it myself and I have basically no knowledge of home recording), but I feel like Infección is probably the most straightforward, pop-oriented band I've ever been in.

Infección had two main inspirations: the Shitty Limits and Sudor. After driving the Shitty Limits on their final US tour I had a moment of realization that the personal and musical issues that hampered the band I was playing in at the time, Devour, weren't a necessary part of being in a band, so when I got back from that tour I left Devour with the idea of starting a new band that was a lot more fun. Bobby Michaud was obviously my #1 pick for drummer (and he remains my favorite punk drummer), and I had spoken briefly with David about him singing in a Spanish-language band a few months earlier so I hit him up with the idea. If memory serves, Rich from Whatever Brains either heard some of my home-recorded songs or heard us practice and offered to join on bass, which infinitely more melodic sophistication to my simple, straightforward punk songs.

I remember when we played our first house show there was already a buzz about us. Aside from maybe Crossed Eyes, there hadn't been a Raleigh band that came from the hardcore scene but had melodic elements. I think that people were already growing sick of the retro hardcore thing and we got an immediate positive response, and people continued to react really positively every time we played. While the recording on the tape certainly could have been better, I felt like that initial batch of songs pretty much accomplished the goal I set out for, which was to merge the riff-y, straightforward, classic punk style of Shitty Limits with the energy and urgency of Sudor's early releases.

Unfortunately the band didn't really progress much beyond that. We wrote two additional songs that didn't appear on the demo, and each served to expand our palette. One song was a short, blisteringly fast song built around a slightly discordant series of notes delivered in rapid-fire triplets. The second was a mid-paced, new-wave-influenced song that was, by far, the most pop thing we did. Once I figured out that Rich would add richly melodic basslines to whatever I did, I pushed myself to write even simpler guitar parts, making the guitar hold down the rhythm (which is usually what the bass does) and freeing up the bass to carry the big melodies. It's a strategy employed by a lot of my all-time favorite bands (most importantly, Wire), and I was really pleased to be (an admittedly small) part of a song I thought was really great. However, as we were doing a new recording session with Will from Whatever Brains (with an eye toward possible release as a 7" or 12"), Bobby announced that he was moving to Atlanta, and unfortunately Infección never practiced or played live again. As a matter of fact, we didn't even finish mixing that session.

I might have mentioned this in some respect before, but lately I've been having a lot of meta-type thoughts about punk. Here in Raleigh we're in the midst of a bit of a venue crisis. There are a couple of bars that are supportive of the punk scene, and I am eternally grateful to them for letting punk happen in their respective establishments. However, to me bars simply are not punk, particularly since nearly every bar in this area (with the only exception, I believe, being the Nightlight in Chapel Hill) is either unwilling or unable to do all ages shows.

When I started the record store I hoped that it would be a shot in the arm that would take the punk scene in Raleigh (and, more broadly, in North Carolina) to a new level, but that hasn't really happened. In fact, nearly the opposite has been the case; while there are still a ton of great bands in the area, there have been barely any DIY punk shows to speak of in the past year or more. Touring punk bands now routinely hit up Greensboro before Raleigh, and I think we've pretty much lost our reputation for the wild explosions of energy that shows here were doing the mid- to late-00s. I think that part of the reason the store hasn't sparked some kind of NC punk renaissance is that, particularly in the era of downloadable music, a record store really only services a small corner of the punk scene.

It's always been the case that people are attracted to punk for different reasons, and the different priorities and values of these camps causes a lot of the conflict in punk. Some people are attracted to punk because of fashion; people on the outside of this group might call them poseurs, while people inside this group wonder why everyone else doesn't dress punk. Some people are attracted to punk because of its association with radical politics, and they grow frustrated at other punks' political apathy and/or inertia. And then there are the record nerds, which I realize, retrospectively, is the group I identify with. We are the keepers of the flame, the ones who curate and preserve the artifactual evidence of punk's existence. it's a noble pursuit in the abstract and my little group often grows frustrated with people who don't "support the scene" by buying stuff. However, the flip side of this perspective / attitude is that punk can become just another market, another set of goods and services to buy. When I opened the store I thought it would be a meeting / hangout space for the punks, but really it's just that for a certain kind of punk: the kind who both likes and is able to buy stuff. I certainly don't want that to be the case, but when a space is billed primarily as a store I can see how it would seem weird to go there without the intention of buying something.

So, in light of all this thought I've been trying to wrap my mind around how a DIY venue might be possible. Would this be the mythical meeting place that brings the punk scene together? Would it be something else for people to complain about, take advantage of, and eventually take for granted? Would it be more trouble than its worth? Would it spell my final and complete financial ruin? I have no answers to any of these questions... in fact, they strike me as the kinds of questions you can't answer without the requisite experience.
Back to News