All Things to All People Vol. 4

HOLY SHIT THERE IS A NEW CAREER SUICIDE SONG! That one really came out of nowhere, and what's even cooler is that it's awesome (not that I expected anything less). Jonah is back on the drums, so it sounds like the earlier stuff since, if I remember correctly, Jonah ended up playing drums on a lot of those recordings anyway. It's hard to convey what an important band Career Suicide were to me in the early 00s. Along with Direct Control, they seem to have been almost wholly responsible for resurrecting true early 80s style hardcore, and I know they preceded DC by quite some time as I vividly remember talking about CS at length the first time I hung out with the Direct Control crew. Anyway, timeless band... can't wait to hear the whole album!

New CCTV song as well! I know nothing about where this came from or what it's intended for... I just happened to come across it on youtube. I have to say I remain 100% into the NWI stuff... I worry that at some point it's totally going to jump the shark and not be cool anymore, but I think we have a ways to go until that happens. In the meantime I'm going to eagerly gobble up everything this scene has to offer.

So I just heard the news that GISM is going to be playing a reunion show in the UK. At first hearing it, this seemed like pretty incredible news. I mean, I love GISM as much as the next guy, and their first two records in particular are some of the most singular and endlessly fascinating objects (both musically and graphically) in the history of punk. However, after about 5 seconds of reflection I realized that I just do not give a fuck about reunion bands anymore. Poison Idea are also playing in Richmond (about 3 hours away from me) next year, and I'm not even if sure if I'll go to that. I remember thinking about driving up to CBGB to see Poison Idea the last time they came out east and I decided not to do it... I have no idea how that show was, but I'm sure I would have thought it was awesome regardless. This time, I feel like the best-case scenario is a competent band playing a well-rehearsed, well-selected set list. And honestly, who cares? Anything that was interesting about Poison Idea or GISM is long gone, and I'd much rather spend my time going to see a band that is making good music right now. Honestly, I'd way rather see a bunch of friends put together a Poison Idea or a GISM cover band as at least then I'd (hopefully) be at a DIY punk show that I actually felt like being at.

Speaking of DIY punk shows, THERE ARE BASICALLY NONE IN RALEIGH RIGHT NOW AND IT SUCKS! My friends and I speculate endlessly about the reasons for this. The dominant theory is that there were a few years where people got lazy about booking all ages gigs and instead just had 18+ and 21+ shows in bars, so there's a whole generation of younger kids who didn't discover the scene, and hence didn't move into shithole houses where they want to have shows. I'm not sure if that's all 100% accurate... maybe it's just that "the kids" find it more gratifying to post on social media and play video games or whatever it is that teenagers do these days rather than listen to punk and participate in the punk scene. And, really, what does the punk scene have to offer them? When I discovered punk it was a way of owning my misfit status, of signaling to the world that I wanted something more than what it seemed on the surface to offer. Nowadays there are probably more efficient ways to accomplish the same social goal without all of the historical, political, and cultural drama of punk. But then again I'm old and terribly out of touch with the kids, so there's a perfectly good chance that I'm extremely off base. 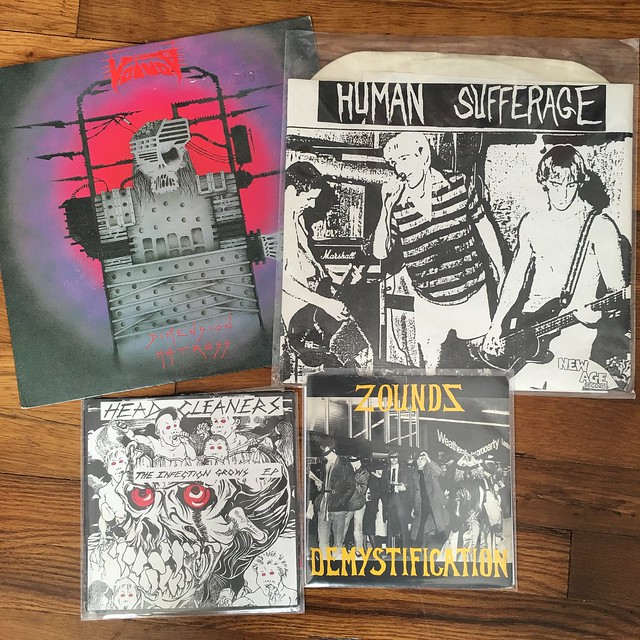 I've never been one to post about my "scores" on message boards, but I do like writing about my scores, so maybe this blog is a good place to collect those thoughts? The pic above is a few things that I have acquired for myself lately. The Zounds and Headcleaners records were just things that I came across semi-cheap online... longtime favorites that it's nice to finally own on vinyl. The other two are things I was kind of chasing after.

Voivod has become something of a big band for me over the past couple of months. I've always liked them, but the older I get the more I find myself listening to metal. I was on a pretty heavy Hellhammer / Celtic Frost binge in the spring and summer, and around this time Voivod really started catching my ear as well. I think that I've owned all of their LPs up to Nothingface at some point or another (some of them multiple times) but always ended up selling them because they never really clicked with me. However, all of a sudden Killing Technology was the only record I wanted to hear (and thankfully an original copy came in to the store this summer and I managed to snag it), and now that I've kind of worn that out Dimension Hatross is sounding even better to me. Really, it's kind of weird that Voivod are even classified as a metal band. Aside from their haircuts and clothing, their songs are short and economical as many hardcore bands, and they've never been shy about acknowledging their big debt to early Die Kreuzen. Anyway, I was stoked to grab a copy of this for a decent price after poking around online looking for one for a couple of months.

The other big score for me is that Human Sufferage 12". This band was from Columbus, Ohio, and they have been something of an enigma for me for a long time. I think that Mike from Direct Control played me this LP 8 or 10 years ago. I remember a beer-soaked night hanging out with him and Musty when Mike told me that this 12" was the only record he had ever bought online in his life. I remember that it ripped, but pretty much everything rips when you're partying, right? Anyway, I always kept an eye out for Human Sufferage's stuff, and a few years ago I happened upon a sealed copy of their 2nd LP, Thank You, Mother Dear at Goner Records in Memphis and immediately snatched it up. (That record is available on youtube here.) Mother Dear is pretty good, but I knew this first 12" was the one I wanted, and the fact that I never even came across mp3s or a youtube video of it made me itch to hear it all the more. Once it finally arrived I was treated to some solid, punky, early 80s USHC that's pretty much just the way I like it. For some reason they remind me a lot of that old California band Anti, or maybe even Sex Drive-era Necros. It's basically sped-up punk... or maybe what came just after that, i.e. bands that were dyed-in-the-wool hardcore bands, but still had a lot of influence from punkier bands like the Angry Samoans. Anyway, it's not the best record of all time or anything, but I've been spinning it constantly, and it's nice to listen to something that's so out of the echo chamber of the internet.

OK, since this is already a day late I'll leave this version here. Lots to do this week grading papers for my teaching job and preparing for Black Friday weekend at the store!
Back to News