All Things to All People Vol. 16

Mark the date: April 2016 is the month that broke all of my systems.

I write this on a sunny Wednesday morning in May. There were thunderstorms all night and the internet has gone out, which is probably the only reason that I'm writing this right now. It's also the reason that I don't feel like someone is sitting on my chest for the first time in many, many weeks.

I dare say that Sorry State has acquired a reputation as an efficient enterprise full of hard-working people. This is definitely true, but as the person running the show I'd put more emphasis on the "efficient" part than the "hard-working" part. I don't know if it's always been the case, but over the past several years I've learned how to excel at setting up processes that don't require much thought. Things that seem to require a lot of effort to other people just seem to happen for me because I don't force myself to come up with that extra bit of force required to overcome the static friction that points you toward naps or Netflix or drinking or whatever it is that people do... getting things done is my habit. It's just what I do.

However, in April 2016 there was simply more to get done than I was able to do. Thanks mostly to Record Store Day, Sorry State's sales in April 2016 were roughly double what we do in a typical month. This is great, but it also means that there was twice as much work to do. I did get some outside help by hiring some additional temporary staff and letting Seth and Jeff pick up a few extra shifts here and there, but largely we completed (or are still in the process of completing, in some cases) double the amount of work with the same amount of staff and infrastructure. It's been exhausting, and while we've continued to fulfill our promise of 24-hour turnaround for nearly all orders, some other things have started to slip, namely the writing that I do for the web site and newsletter. This is a shame because the writing that I do for Sorry State is perhaps my favorite part of the job. It's invigorating... it makes me feel energetic and alive to think deeply about music and shape my thoughts into the little paragraph-long blurbs that you see on the web site and the newsletter. Without the rejuvenating nature of that task, Sorry State has sadly begun to feel a little bit more like work than it typically does.

However, things are looking up. I just turned in most of my grades for the term (annoyingly, several students took incompletes so their [and, consequently, my] work will drag on for a few more weeks), which means that I don't have to think too much about teaching for the next 3 months. Honestly, I don't really know what I'll do with myself. I've still been in catch-up mode mostly, working around the clock to try and clear the backlog of work that was generated during our very busy time. However, beyond that I'm not really sure what I'll do. One option is taking all of my energy and dumping it into Sorry State. We've done a lot of big used buys lately, so we have a whole lot of vinyl that hasn't been sold yet because it hasn't been processed, cleaned, and put on the floor. Another options would be just relaxing a little bit. I'm not very good at that, but I do want to get back to working out every day. I've always really enjoyed working out, but I let it slip somewhat during April.

Another goal is to join what I call the "punk jet set." Since there's so much work to do around the shop I've rarely gotten out of Raleigh since the store opened two and a half years ago. In the meantime, it seems like US punk culture has changed somewhat, with fewer bands going on lengthy tours and more people traveling to big regional and national festivals. Sometimes even just big single shows, like the recent Death Side gigs in New York. I wish I could have gone to those, but of course they fell on Record Store Day weekend so there was no way that I was making it. Anyway, if the bands aren't going to come to me I'm resolving to go to the bands, seeing more gigs and connecting with more of my out of town friends. So hopefully you'll see me at an out of town punk gig soon!

A few things I've been listening to lately: 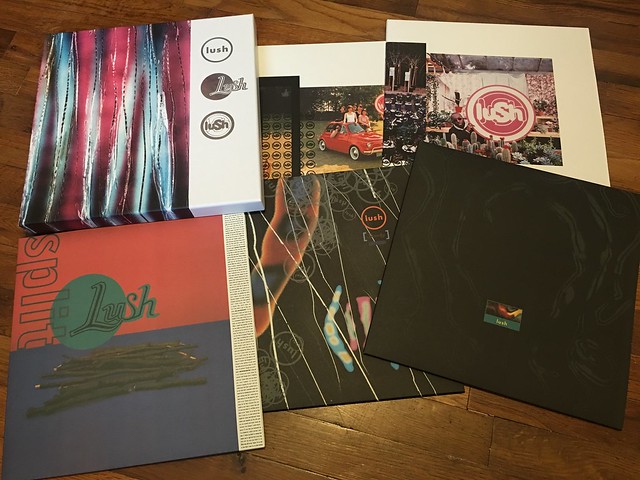 I picked up a few Record Store Day releases for myself (despite what everyone else was saying, there were some good ones this year... though more on that later... I'm planning on writing my next blog post about Record Store Day), the most extravagant one being this Lush box set. Honestly, Lush is a band I never really paid much attention to in the past. While they were on my radar, I was a couple years too young to have really gotten into them. In fact, I was just a couple years too young for shoegaze in general. While I was old enough to have heard many of those bands, I was a teenager with raging hormones who just wanted music that was as loud and as fast as possible. So, I'd watch 120 Minutes religiously every Sunday, but really I was just sitting through all of the shoegaze, Britpop and college rock on the off chance that they'd play an old Black Flag video at 1:45 AM.

However, since Record Store Day I've probably listened to Lush more than any other band. I don't know what it is, but they're really scratching an itch right now. While I'd heard the band before, I think that my ears had to adjust to their slightly quirky sense of melody. When I checked them out before none of the songs really stood out, but now their best tracks feel like impossibly long strings of hooks. 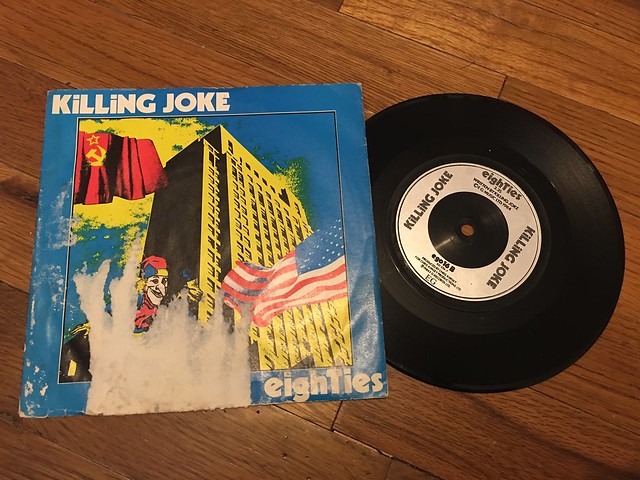 Over the past few months we've slowly acquired the largest part of a friend's really stellar record collection. Among said collection was pretty much every single Killing Joke record. Consequently, Jeff, Seth, and I have all been listening to more than our fair share of old Killing Joke records. Honestly, I'd never really checked out their later stuff too closely. I heard the first album sometime in the late 90s and of course I absolutely loved it. However, I picked up a copy of their second album, What's This For shortly thereafter and wasn't too impressed. Well, it turns out that I deprived myself of some absolutely killer music. In particular, their 1985 album Night Time has been in constant rotation, particularly the brilliant single "Eighties," which even had a video:

"Eighties" is probably most famous as the song from which Nirvana "borrowed" the riff for "Come As You Are," but I think it's a brilliant song in its own right. As you can see, the sleeve on my copy is damaged, but I'm not too worried. The vinyl is fine and if I decide I want a nicer copy it doesn't look like they're too expensive. 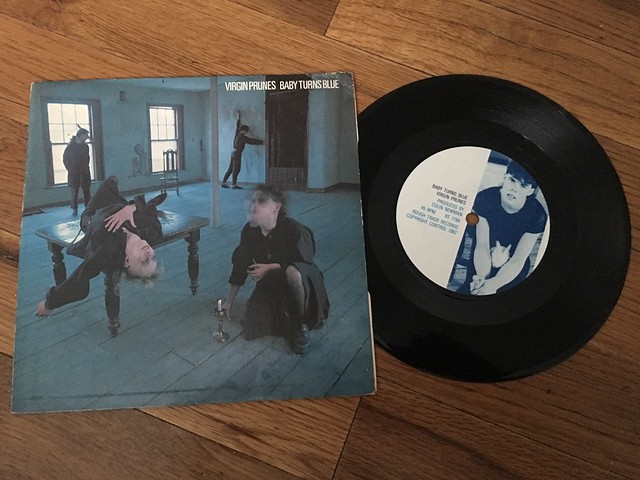 Also in that same collection was a heap of Virgin Prunes records. They're a band I hadn't really checked out at all before, but I brought home most of them and gave them at least a listen or two. Much of it was too abstract for my tastes (A New Form of Beauty Parts 1-4 was a particularly tough listen, reminding me of very early Cabaret Voltaire), but man, "Baby Turns Blue!" What a track! I don't know if I could stand a full album of tracks this hot, but I do wish there was more in their catalog as exhilarating as this. Oh, and if you're intrigued by this group you should definitely check out some of their truly bizarre live vids on YouTube. 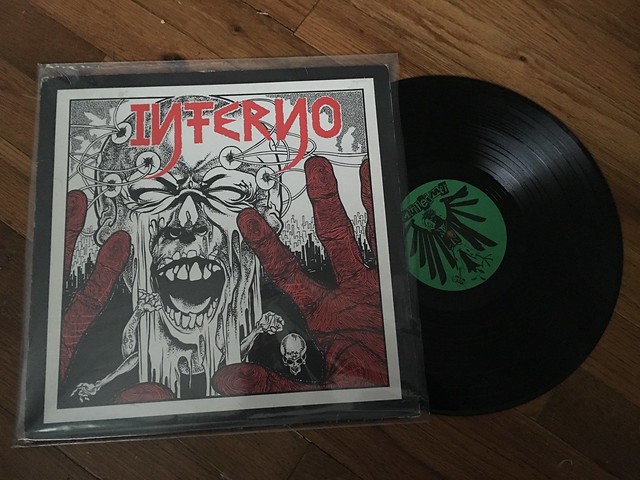 This was a very cool walk-in to the shop: Inferno's Tod & Wahnsinn LP, original pressing on Mülleimer Records. Inferno is a band I have a long history with... in fact, my old band Cross Laws used to cover "Escape from Society" (you can even hear a recording of it here). Honestly, I much prefer their Hibakusha LP, but this LP does have its charms, particularly given that this original pressing sounds quite a bit punchier than any version I've owned before. However, it's also kind of shitty in a lot of ways, with crummy drumming and sometimes really obvious, boring songwriting. I suppose the adjective I'd reach for to describe this is "charming," and while that sounds condescending I really do love this record. 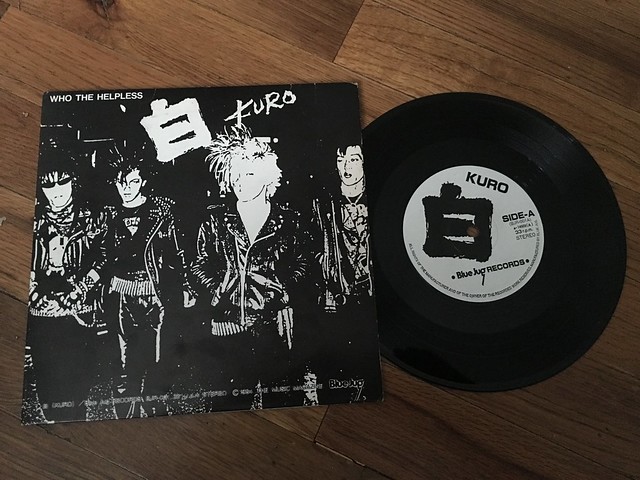 Finally, my absolute favorite take-home from the shop in recent memory: Kuro's Who the Helpless 8". I'm so glad that Sorry State has developed the kind of reputation that prompts people to come to us when they want to sell their treasured rare records, because having things like this randomly come across my path is one of my favorite parts of having the store. As is the case with Lush, Kuro is a band I've certainly heard plenty of times in my life, but never really grabbed me in the same way that a lot of other Japanese bands did. I'm not sure if the context is just right at the moment or if it's just that this original pressing sounds so fucking powerful (and indeed it does), but I can't get this record off of my turntable. The noisier Japanese bands from the 80s were so ahead of their time. While Who the Helpless came out in 1984, it seems like they're exploring a lot of the same ideas that D-Clone would be working with on their Creation and Destroy LP some 30 years later. Basically, Kuro were taking the focus on sonic texture from noise and musique concrete and grafting it onto a frame of furious hardcore. While D-Clone (at least on that record) have a brittle, processed sound that's very much engaged with current possibilities of digital sound (re-) production, Who the Helpless is all analog warmth. I can't think of a single better distorted vocal sound in the history of punk.

OK, I think that's enough for now... I want to get this online because I haven't posted one of these in ages. Hopefully I'll be much more regular with the blog now that my life has calmed down somewhat!